This was probably inevitable...

Disney plans to take the many franchises under LucasArts' control and license them to third-party game developers. LucasFilm said it would lay off workers "across the organization" as a result.
Click to expand...

"After evaluating our position in the games market, we've decided to shift LucasArts from an internal development to a licensing model, minimizing the company's risk while achieving a broader portfolio of quality Star Wars games," the company said in a statement.
Click to expand...

Staff member
Read about that yesterday. Sadly, with most of it's inspired artists long gone, Lucasarts' golden age had already past so it's not that much of a loss. I am trying to remember the moment I started disliking Disney though. It was before gay day at Epcot. I think it was the Lion King but it could have been before that. Whatever, Disney is just another large corporation eating everything without caring and has been for a long while.
Last edited: Apr 6, 2013

The Mighty Gerbil said:
Disney is just another large corporation eating everything without caring and has been for a long while.
Click to expand...

Perhaps. Then again, that doesn't mean everyone they license things out to shares in those uncaring ways. If Disney-owned LucasArts licenses out future adventure game development to Telltale Games (seeing as they already worked on Monkey Island, it's hardly a stretch), it'll be hard to complain on that front. And if Disney-owned LucasArts desires to be as prolific as Disney-owned LucasFilm claims to want to be, then it's plenty possible we'll be seeing more and more games with lovable licenses coming out resulting in the possibility of at least some of those games ending up in good hands, too.

Example: If this shift to licensing instead of internal development happens to get Obsidian the go-ahead to make a new Star Wars RPG set in the time between Episode III and Episode IV as they were previously pitching, then I'm plenty okay with it.

Just sucks for those losing their jobs in the process... and to see a studio with some great works in its legacy (as well as some less-than-stellar... heh... stellar) more or less shutting down as a development studio.

Staff member
I'm sure Disney will stumble upon some good things in it's outsourcing by shear volume. Thing is artists will always care most for their own creations, not others, and it shows in the product. To create from scratch is, something original, something wholly representative of you and Lucasarts won't be doing any more of that. Yeah I'm sure they had some oversight with Star Wars before but I can only see Disney adding more hurdles. 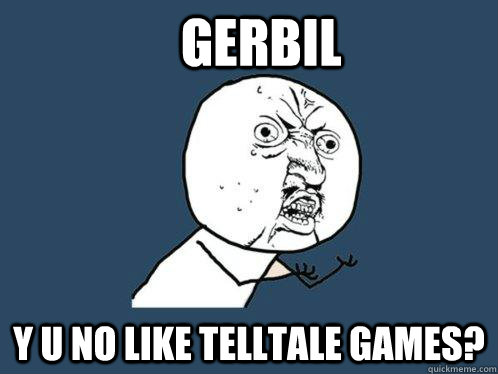 Because at one time the Monkey Island series was among my favorite games of all time. After playing Taletale's Sam and Max series (in which I laughed slightly maybe once FOR THE ENTIRE SERIES and rolled my eyes enumerable times) it was quite obvious Taletale would never produce anything near Lucasarts quality. Also I watched an entire let's play of "The Walking Dead", read the wiki and came to the conclusion the game was a few hours long quicktime event with no real consequences for any choice. Seriously look it up. Whether NPC A or B dies you end up in the same place doing the same thing...
...and every body dies later on anyway!
Also the plot and outcomes are so painfully obvious in The Walking Dead, every, single, step of the way. At one point they meet a couple guys (and this is just after they are introduced and they had not even shown their mother) and for an half an hour I am going...

Staff member
Having played through the first episode of Sam and Max and having played a few of the LucasArts "golden age" games, I understand (and agree with) Gerbil in this case.

Don't misunderstand me; Telltale makes good games. But Grim Fandango vs. any of the Sam and Max games? Grim emerges the clear winner (IMO).

Disney is repugnant. That said - at least we have a chance to see another quality Star Wars game. There hasn't been a good one since Jedi Knight Academy. Hopefully they will license in hopes of building a brand on good games instead of having these clumsily thrown together and expecting them to sell on the Star Wars name, as LucasArts has.

Never heard of Jedi Knight Academy, but I like SWTOR

Yeah, sorry did not mean to imply TOR was not a good game; I haven't played it. JKA was fantastic though...the epitome of a good LAN game. Balance was pretty good, levels were disigned well, lightsabers were actually fun to use (and throw), and force powers were extremely satisfying. It just came together very well when someone would be running down a catwalk then force pushed to their doom, haha.

RyanB said:
Yeah, sorry did not mean to imply TOR was not a good game; I haven't played it. JKA was fantastic though...the epitome of a good LAN game. Balance was pretty good, levels were disigned well, lightsabers were actually fun to use (and throw), and force powers were extremely satisfying. It just came together very well when someone would be running down a catwalk then force pushed to their doom, haha.
Click to expand...